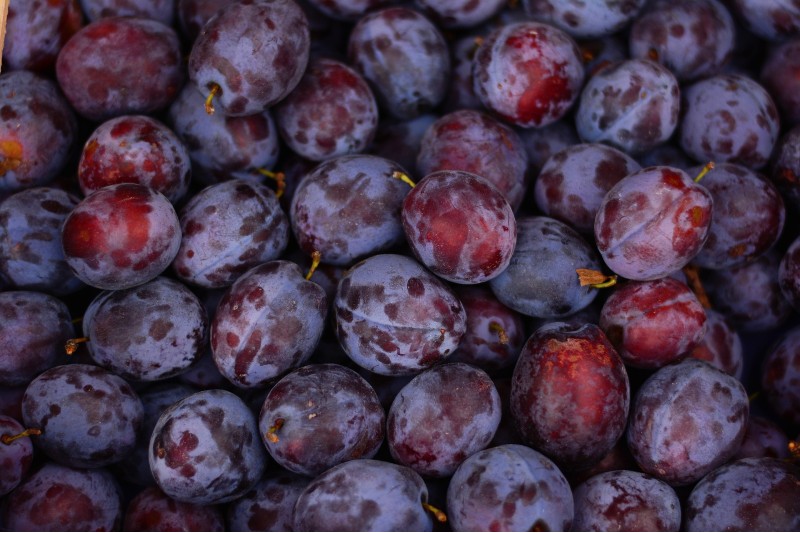 With batches of hard apple cider and pear cider fermenting upstairs, I wondered: what else might ferment into a tasty drink? Pears contain significant quantities of sugar, and yeast just love to munch on sugar. Actually, they eat the glucose sugar, and as they eat, excrete carbon dioxide (Co2) and ethyl alcohol. It’s that ethyl alcohol tinge, accompanied by residual flavors, that gives wine (and other fermentations) that special kick.

I had found several simple plum wine recipes online and had wanted to give the idea a try. It’s interesting to be brewing old recipes anew, as it a link between modernity and history. Wines – and meads, especially – are very old recipes; plum jerkum seems no exception. Honey and fruit were fermented far before our more complex modern beers (depending on the evidence one uses to make the calculation).

The surprise arrived at the second step. I hadn’t realized that plums contain high levels of natural pectin. Pectin is a gelling agent, and activates with sugar and heat. Cranberries also have gigantic levels of pectin (and you know what that creates: cranberry sauce!).

The result is that our plum juice/water/sugar mixture is viscous; thick, and not watery. I wonder what will happen as it ferments?

* Bring water to a boil, add plums. Some suggest placing plums in cheesecloth for the boil. I didn’t, but then discovered just how viscous the water-plum became & had to press through cheesecloth to extract a few cups’ worth of juice).
* Press liquid from plums (when soft)
* Let water/plum cool a bit, and add + dissolve sugar
* Yeast can tolerate warm, but not hot, water (95-105, depending); add according to packet
* Ferment w/ airlock in a dark, temperate location for 2-3 months
* Rack and clarify
* Bottle and… try… waiting!

10/15/15 Update: Still aging two bottles! See the comments below for info about how it went.

How did the Plum Jerkum turn out?

Fantastic! We only made a few bottles, but it’s a sweet, delicious drink. Be ready for some sediment – the bottom 1/8th or so was a little thick. But, otherwise: highly recommended! I think we’ll go crack open another bottle today…