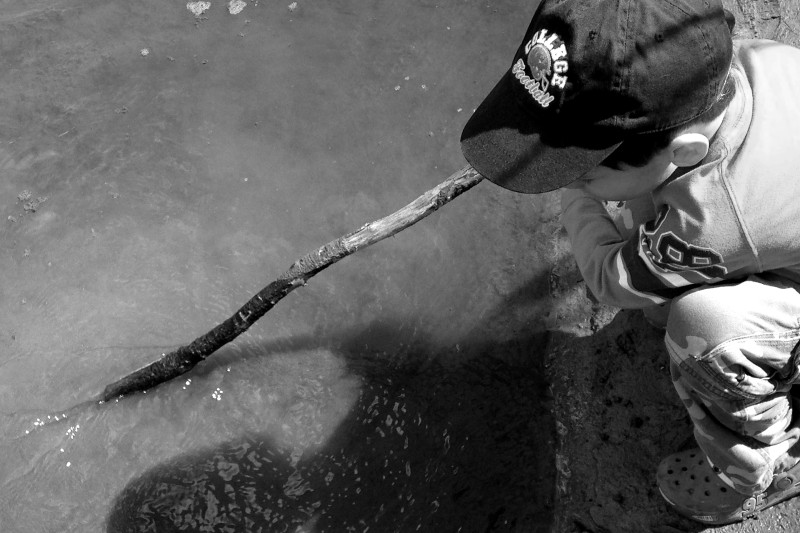 Shockingly, voters in the town of N. recently approved a ballot measure to ban children under the age of 13 from accessing and using The Stick. With time on my hands, I visited to understand just how a common Stick might come to be Banned.

The law in N. describes a Stick as any naturally-grown tree-like appendage between 6’’ and 6’ in length and one centimeter or greater in girth. Whereas philosophers of yore posited spontaneous generation, most Scientists believe Sticks originate in Trees. Trees, in turn, are “…perennial plant[s] with an elongated stem, or trunk, supporting branches and leaves in most species.” Far from a rarity, Sticks are often be found in their detached state, disparaging stately emerald lawns, clogging otherwise clear roads and choking inviting footpaths through forests and other vegetated areas.

Detached sticks are nuisance enough, yet are magnified in nuisance for several additional reasons elaborated to me by the Mayor of N. Firstly, Sticks are often pointed at one or more ends. Nefariously, they can branch, much as coral, into singular sharp Sticklets. Medical establishments attribute eye-opening injuries to the Stick, received “during play” though numbers do not indicate whether Sticks or Sticklets are the cause. Secondly, Sticks are accessible to our nation’s young people. Teens, youth and children of the earliest ages have ready access. That such tools are freely and readily available, unregulated, is in itself a travesty. Finally, Sticks are an economic detractor. As they’re not made in America, they do not support the American worker; and as they can be repurposed for other activities, they reduce quantities of sales for consumer categories in such notables as “the footbridge,” “pole vault,” “lance” and “garden stake.”

For these perfectly relevant reasons, the National Pole Vault Association (N.P.V.A.) worked with the local Concerned Parents’ Safety Society (C.P.S.S) to craft legislation to ban the Stick. Last year, at the height of the Olympic trials, a youth in N. was cruelly cut when splinters from a Sticklet he was using to pole-vault across a kiddie pool entered the webbing between his third and fourth digits of the left hand. A neighbor, the local President of the N.P.V.A., heard this boy’s vapid distress and rushed the youth to the local clinic where emergency technicians extricated the offending material with tweezers. Insurance, it should be said, does not cover “causes other than those attributable to Nature’s own working,” and therefore declined to provide coverage.

The President of the N.P.V.A. thus partnered with the C.P.S.S. to draft legislation, lobby local officials and, through an emergency session of the Representative Town Meeting, marshall votes to pass legislation into law. To great ‘huzzahs’ and ‘sticks and stones break your bones’ thus was banned, vote by vote, the Stick and its derivative Sticklets. The law reads as follows:

This, the Mayor willingly shared with me. I asked: “Sir, have you yet imprisoned anyone for Possession with Intent to Use?” He laughed, and replied with a grin: “No, but it’s sure to catch a cross-section of our populace in trouble!”

The effect of the law is a challenge for an outsider to judge. At first glance, eye injuries are down. Official statistics indicate that manual sports instruments have taken up that slack. Next, with the banning of the stick, parents have moved their young people indoors, so as to minimize contact with these potentially-lethal objects. This has had several positive effects, including reducing youth exposure to potentially-harmful sunlight and increasing the amount of time young people spend consuming media, which supports increased economic activity for online ordering and delivery services. Finally, as the President of the NPVA gleefully pointed out, sales of Pole Vaulting equipment is up, and significantly so, as he’s finally sold the two from the back of his garage at a local garage-sale.

Ultimately, I leave the Town of N. with more than a little consternation, but with an understanding that kids, today, are subject to a great many things that kids of my 1980s were not. For one thing, Stick Safety Education was a part of our required kindergarten curriculum, along with Tree Climbing. Thus passed, we were allowed one hour of stick-time, in the garden, partially supervised, per day. I offer this as a parting opportunity for those parents seeking an alternative to the banning of the Stick, Rock, Hammer and Nail, or any other of the things that parents are deciding to keep away from their young people. After all, who is to say that, at some juncture, we won’t have a need to once again pick up our sticks and play?